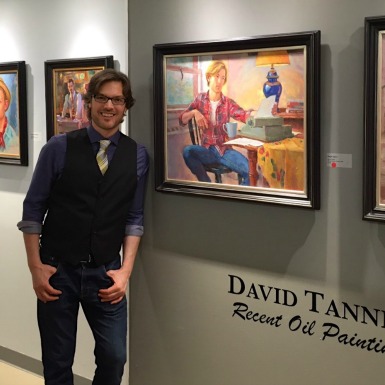 David Tanner is a representational oil painter in Richmond, Virginia, focusing mainly on figurative compositions. Since receiving a BFA in illustration from VCU, his study of traditional painting technique includes workshops with modern masters Nelson Shanks in Philadelphia and Robert Liberace in Washington DC.

David’s paintings have been accepted into national exhibitions including Oil Painters of America and Salon International. National awards include paintings honored for the Portrait Society of America’s annual competitions, as well as honors in competitions hosted by PleinAir Magazine, The Artist’s Magazine, Raymar Fine Art, and Plein-Air Richmond. His Self-Portrait won 1st prize in American Artist magazine’s annual competition and was featured on the cover of this respected publication in September 2012.

American Art Collector featured David’s work in their "Artist Focus" series in December 2014. A five-page interview on his working methods can be found in the April 2015 issue of PleinAir Magazine. In November 2018, David authored an article called “Developing a Narrative in Your Figurative Paintings” for Artist’s on Art online magazine.

In November of 2016, David was interviewed for PBS television’s “Virginia Currents”.

David has been teaching at the Visual Arts Center since 2001. His work can be seen in Richmond at Crossroads Art Center, and on his website at www.DavidTannerFineArt.com. Follow David on Instagram @davidtannerfineart.