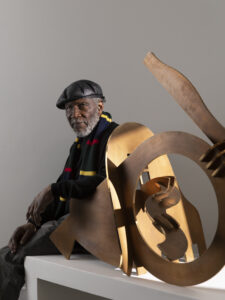 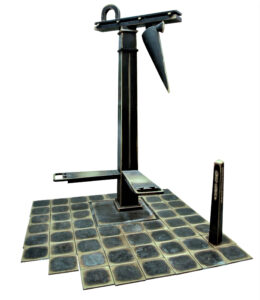 The Visual Arts Center of Richmond presents a solo exhibition by Atlanta-based artist Curtis Patterson. Journey Through will showcase a selection of bronze and steel abstract sculptures from the 1980s to today. Patterson’s unique command of materials and his dynamic compositions point toward an illustrious, decades-long career as a sculptor of engaging and often large-scale public works.

A native of Louisiana, Patterson’s experience of growing up during the Civil Rights Movement informs the subject matter and the symbolism in his work. With inspirations in art history ranging from Hale Woodruff to Henry Moore, Patterson’s large-scale sculptures and multi-dimensional wall works emphasize a spectrum of African diasporic experiences within the context of modern and contemporary art. His abstract approach is also inspired by a longtime interest in improvisational jazz. Motifs and forms in the Rocker Series, for example, encourage an interpretive dialog between the artist, the artwork, and the viewer. These slot-fitted, interlocking, geometric shapes provide balance and kinetic movement.

Other works on view, such as Shango’s Friends, highlight his continuous use of African symbols, such as the Yoruba double ax and double iron as visual elements that, in his words, “pay tribute to domestic labor implemented by people of African descent.” From his 1980’s series Unbroken Connections, which celebrates such leaders as Rosa Parks and Nelson Mandela, to his most recent mask-inspired wall reliefs

Diasporic Reflections, Patterson demonstrates a longstanding commitment to “raising consciousness about a people who have given so much of themselves.”

Born in Shreveport, LA, sculptor Curtis Patterson’s parents instilled in him a strong sense of discipline, balance and spirituality. Being the grandson of a master carpenter fostered a deep affinity for working with his hands. With this solid foundation, Patterson earned his BA in Art Education from Grambling State University, an HBCU listed on the African American Heritage Trail. After time spent in secondary education, he earned his MFA from Georgia State University in Atlanta and was the first African American to receive an MFA in Sculpture from GSU. His practice has moved from painting, wood, and ceramics toward cast iron and large-scale, fabricated corten steel sculpture. Patterson was a faculty member at The Atlanta College of Art from 1976 to 2007. He entered the realm of large-scale, public work with “Cometh the Sun” commissioned by the City of Atlanta’s Bureau of Cultural Affairs. His work includes commissions and permanent public sculpture installations in several prominent cities in the United States including: Atlanta, Georgia; Columbus, Ohio; St. Paul, Minnesota; Shreveport, Louisiana and Dallas, Texas.

Patterson is represented by Laney Contemporary in Savannah, GA, where his first solo gallery exhibition was held in April 2022, curated by Melissa Messina. Laney Contemporary will also present his work in December 2022 at Untitled Art Fair in Miami, FL.